Get fresh music recommendations delivered to your inbox every Friday.
We've updated our Terms of Use. You can review the changes here.

by Jaipongan Music of West Java 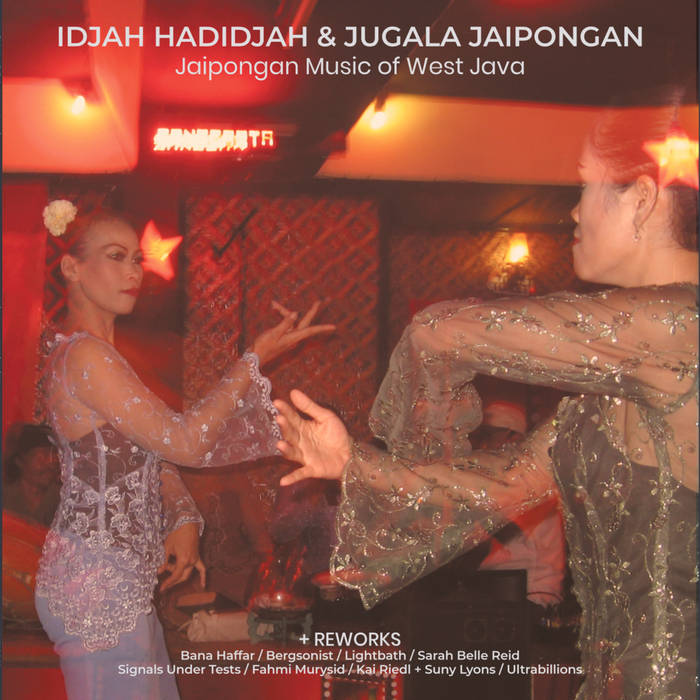 This album and reworks of the original tracks by electronic composers is available as a double LP at Hive Mind Records!

The singular expressions of music across Indonesia are seemingly limitless, though few are as dynamic and hold such a colorful history as jaipongan of West Java. The form of jaipongan we know today was born from the fields of Java where an early form of music called ketuk-tilu echoed over fields during harvest times. Known for intense and complex drumming coordinated with equally dynamic solo female dancing, ketuk-tilu performances included a rebab (a small upright bowed instrument), a gong, and ketuk-tilu (“three kettle gongs”). Though the original performance context of this music revolved around planting and harvesting rituals, with the singer accepting male dancing partners, over time ketuk-tilu became an outlet for village life expressing fertility, sensuality, eroticism, and, at times, socially accepted prostitution. Activities in the first half of the twentieth century that were best suited amongst the elements of harvest and outside of urban criticism.

Fast forward to 1961, the year the Indonesian government placed a ban on Western music, most specifically rock and roll, ostensibly to revive the traditional arts and have the country refocus on Indonesian ideals. Though, this attempt to reclaim, and in many ways conservatize, musical output had an unexpected musical outcome. In the early 70s the composer and choreographer Gugum Gumbira (1945-2020) took it upon himself to retrofit and creatively expand the core elements of ketuk-tilu into a contemporary form. One that would harness ketuk-tilu’s core dynamics and nod to the government’s pressure to revive traditional forms, while creating a fresh and socially acceptable art form where enticing movements, intimate topics and just the right degree sensuality had a collective musical expression. Born was jaipongan.

Musically, Gumbira added in the gamelan thereby augmenting the overall instrumentation especially the drums. Importantly, he brought a new and very focused emphasis to the role of the singer allowing them to concentrate solely on their voices opposed to dancing as well. These voices weren’t there to narrate upper class lifestyles or Western flavored ideals (and colonial mentalities in general), but the worldview and woes of the common people of West Java. Intimacy, love, romance, money, working with the land, life’s daily struggles and the processes of the natural world were common themes in jaipongan that ignited the hearts of the people and directly spoke to both the young and old. The two timeless voices that would define the genre and fuel it to echo out across the globe were Idjah Hadjijah, featured here, and Gugum’s wife, Euis Komariah (1949-2011), two nationally cherished voices that catapulted the genre into the sensual, elegant and other-wordly.

Movement-wise, Gumbira included some of the original sensual moves of ketuk-tilu and intertwined them with movements based on the popular martial art called pencack silat. With just enough new and just enough old, and just enough safe and just enough bold, men and women danced together in public in ways never allowed before. The genre and its performances were an oasis for the optimal amount of controlled intimacy and sexual nuance to be socially acceptable. Jaipongan was embraced by a country longing for new societal norms and creative expressions.

All these elements combined rooted Jaipongan in the hearts of West Java and set the genre on fire. Gumbira established his own studio, Jugala studio in the city of Bandung, where a cast of West Java’s best players resided. This record, as well as hundreds more that have defined music in West Java of every style, were recorded there. Radio, a booming cassette industry, and live performances of jaipongan flooded the country, so much so that the government's attempts to reel it in were futile. Jaipongan had tapped into the hearts, daily worldview, airwaves and clubs of West Java and wasn’t going anywhere. And by listening here, it’s still as alive as ever.

The goal of Javasounds is to provide the most reliable introduction to the revered music of Java Indonesia, and to promote a new model for the collaboration of traditional music and listeners. If you’re looking for new music, curious about what goes on musically in the less known parts of the Islamic world, or simply just want to hear some different music, this is a great place to start. ... more

Bandcamp Daily  your guide to the world of Bandcamp